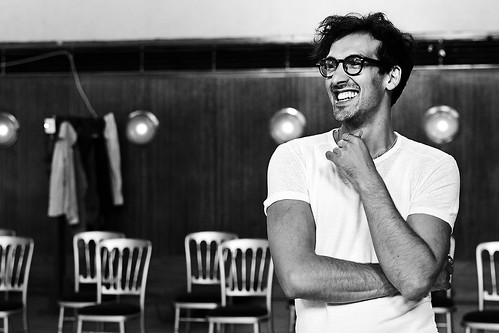 Arthur Pita is Portuguese and was born in South Africa. He studied dance in Johanssburg before coming to London in 1991 where he trained at LSCD obtaining a masters degree. So the biography goes at least. Susan Cunningham took Mr Pita aside to find out the more interesting details. His company Openheart, has just completed a long run at the Place in London with “Camp”.

How is the show going?

Well one of my dancers (Ben) got a big boil on his hand. He had to go hospital where they drained it which means he has been out. So I had to step in which is a really odd situation. First of all the role is not like me at all.

Basically it is too short notice to bring someone in at this point, to make it worthwhile so I decided to just stay in, to keep everybody calm!

When did you last perform?

I last performed in a duet that I made last year or gosh…. Was it the year before? Well it’s been a while. (laughs)

Do you prefer choreographing or is performance your first love?

I think I’ve definitely realised that I prefer choreography! (big laughs!) I mean I don’t mind it. I don’t get nervous and I enjoy dancing on stage and with people, you know, making it happen.

What’s upsetting is that it’s a huge privilege to have this run- I really wanted to sit with the audience, to monitor the audience, change things and develop things and make the show better every day.

This is the second run of Camp- the debut was last summer. What’s different about this performance?

We had a spring dance at the beginning (it is set to Vivaldi”s “The Four Seasons”); a very honest based dance but we tried it 3 different ways on 3 different nights and it just never seemed to work. So I decided to cut that out and I extended the text that one of the dancers talks about at the beginning. We’ve also changed the movement because I love dancers who find their own; I really love to give them that space. I have 2 new boys so we’ve found new movement for them completely. The other dancers who were in it originally have obviously had the chance to improve. It’s like an ongoing experience. I never feel like your completely there- there are always things to do and develop.

Was Vivaldi’s “The Four Seasons” the influence for the piece or was it camping?

It’s very strange- a friend of mine had this cassette about 12 years ago that he always used to play in the kitchen. I thought it was quite good, Nigel Kennedy’s version.

It’s quite flamboyant. I find that whole baroque period flamboyant and over the top anyway so the word “camp” springs to mind.

I thought wouldn’t it be funny to put together a flamboyant show to the seasons. The great thing about nature is that it is always the source of inspiration.

I then thought “well, a campsite”- I love word association! A campsite, that’s where you go to experience nature. Man can’t go to nature alone, you have to have your equipment. There is no way you could go to a mountain completely naked and survive, well you might but you would have to get in to a deep rooted instinct of survival. So I put all these themes together and let the seasons mark it all.

So are you a camper yourself?

Do you know what- I am actually so inexperienced. I like the idea of it (giggles) but it’s actually much easier on stage!

We do have a bit of rain though because the sound of that I love- the sound on the canvas, so we have that (in the piece). Really it is quite descriptive.

Then there is another whole issue about what camp behaviour actually is. When we think of the word “camp” we think of it being very funny, very happy, very gay – Kenneth Williams or something like that! But someone told me recently that the reason why a lot of gay men behave in a camp way is that sometimes when they are growing up, because of their sexuality, they might need more attention from their fathers. So they imitate their mothers. I’m sure if you see a very camp man and you meet his mother, it’s a very similar creature.

However, subconsciously I wanted to make one of the women a lot more flamboyant rather than the men.

There is a fair bit of nudity in the piece. Do you think this is really necessary and what do you feel it adds to the piece?

Because they do this fire dance. That leads in to this wild movement with everyone ripping their clothes off. I think that really does happen; people get out in the wild and they start to feel free and connected so before you know it everyone’s quite happily naked.

What happens is the 3 men get left behind naked and become trees- if a naked person just stands for a long time with their arms out they can become like a tree.

I also wanted to do happy nudity instead of desperate, vulnerable nudity.

Your roots are Portuguese. (Arthur’s parents came from Portugal to South Africa where he was born). Have you ever considered using this as an influence for your choreography?

Absolutely. I think there is a lot of Catholicism that comes out because I was brought up Catholic(not that I am practising now)but it is always so deep rooted.

The next work I want to make is about my grandmother’s village which is in Madera(Portugal)- it’s very rich with the people, the mountains, the sea, the land and what people do. What happens at night and during the day, it’s just really fascinating. So I’m hoping that will come out.

You spent 7 years with Adventures in Motion Pictures. What did you gain from your time with them?

It was very influential and I loved performing- doing 8 shows a week. I liked the big company and touring; being part of a big picture, that was wonderful. I learnt a lot about audiences, what they like, what moods they come in and what lifts them. It’s very good for choreographers to perform. I always knew I wanted to choreograph but I also wanted to perform and get that off my chest. We did it all, went all around the world, did Broadway so I have fantastic memories to hold on to.

Where do you find your dancers?

When your starting out you always tend to work with people you know. When I’ve done operas I’ve worked with a lot of people from auditions but it is also nice working with people that you really know because you know what’s in them and how you can utilise that.

I love people who are open, people that have unexpected poetry inside them. When you don’t expect something to come out you can be really moved or they make you laugh.

Is humour an important element in your work?

Humour is hard; you can’t really plan it, it just has to come out. I think I do the dark and bleak more easily!

If you could collaborate with any dancer or choreographer, who would it be and why?

There are so many dancers that I love……..(big pause and thoughtful sighs)……I suppose if it was a dream it would have to be someone like Pina Bausch(laughs). It wouldn’t be as a choreographer but as a dancer. She is so amazing even when she does one movement and she’s old. I love somebody who’s older and has it in their skin. I suppose that’s a cliché to most choreographers because she is the guru of dance theatre.

Someone else would be like an old lady in Spain doing flamenco. If you can go to a mountain and find someone that has amazing movement ability that comes from a real place, their culture, that would be the ultimate situation.

So what is next on the cards? I hear you will be working with Phoenix Dance Company.

Yes, we’re doing something with Phoenix, doing some opera work, which I love and a tour of “Camp”.