René Burri speaks about the Kremlin, Picasso and the importance of teaching children to seePosted on May 31, 2013 by The Photographers\’ Gallery Leave a commentAlfred Weidinger, Renè Burri in the Belvedere, Vienna, 2012, CC BY 2.0Alfred Weidinger, Renè Burri in the Belvedere, Vienna, 2012, CC BY 2.0This recording is an excerpt from Burri’s talk as part of the Key Speaker series at The Photographers’ Gallery. It was recorded on Wednesday 24 April 2013. More information about our upcoming talks and events can be found here.During his fifty-year career Magnum photographer René Burri has built a body of work that traces some of the world’s most historically significant moments from East Germany and the USSR before the fall of the Berlin Wall and the Iron Curtain, throughout China and Cuba over several decades, and in Vietnam and the Suez Crisis.René Burri was born in Zurich in 1933 and spent his early years studying colour, composition and design at the renowned School of Arts and Crafts in Zurich. It was during his military service that Burri first used a Leica camera. Shortly after, he also developed an interest in film, and from 1953-55 he worked as a documentary filmmaker.Burri’s life changed forever when the well-known photographer Werner Bischof introduced him to the prestigious photography agency Magnum Photos. After joining Magnum in 1959, his first reportage appeared in Life magazine and he subsequently worked for major news magazines including Look, Bunte, Stern, Geo, Paris Match,Schweizer Illustrierte and Du. Burri received the Dr. Erich Salomon Prize from the German Society of Photography in 1998 in recognition of his lifetime achievement as photojournalist. He lives in Paris. 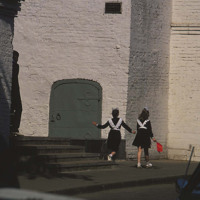 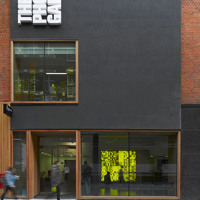 via René Burri speaks about the Kremlin, Picasso and the importance of teaching children to see.